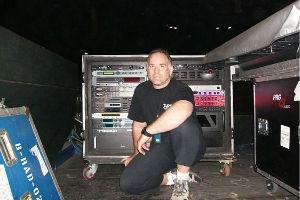 In the following article the author through a very intimate and personal text shares with a friend his day to day as a sound engineer on tours of rock bands, a trade in which daily challenges are faced from the technical.

Well, I was very busy with the Whitesnake tour and returning home only for a short time before getting back on track. I have many stories to tell you about sound handling for this band when we were out of the United States. I met really beautiful places, but you know that fans are the same all over the world: they just ask for loud sound and rock music.

I don't know if you know or not, but the installation of a show depends on the capacity you have on the tour. What I mean is that either you bring all the machinery (and I mean all of it because you have to bring your own energy company with you) or you just stand by and watch behind the scenes. At least, that's what usually happens. Outside of the United States I found it easy even if you didn't bring your own equipment and just let the local suppliers in each country supply you with the necessary equipment. This eliminates any headaches related to electrical compatibility issues.

It's always different
With Whitesnake, the scenario is sometimes a little different. When we bring our machinery, we simply bring three-quarters of it and local suppliers essentially supply us with a PA system and lighting equipment. Therefore, the installation of monitors, FOH (front of house) and behind-the-scenes equipment that we bring require voltages handled in the United States, while the equipment that supplies us does not require it. So, I end up having a strange hybrid of voltage requirements and I have to adapt the equipment in the United States to make everything work.

The way local people deal with this problem is always different from country to country and is generally totally ignored. I bet you'll be wondering how I deal with this. The first thing I do when it comes to making the installations for a show is to look to disconnect the main power and determine the voltage with a meter. Then, I have to look at how to put all the pieces together. You can spend half a day simply specifying the energy. For the front team I have been lucky. All energy passes through a Furman AR-PRO voltage regulator. Really, my only concern here is the type of plug I need to be supplied by local suppliers. Overall, it takes me only five minutes to do the installation.

The tour
Well, let's get back with the tour thing. We started in Australia and New Zealand and although we didn't bring our own equipment, there were no electrical problems. Then we traveled to South America and were in most countries for a month, or something, performing about 15 shows. Here we did have our own equipment and we found different electrical conditions in each country, but things were relatively smooth. The first show was in Brazil and it really was crazy. We were at 36°C and at 89% humidity before the spectators appeared. Then it was all unpleasant everywhere.

In the lighting part I had no problems, but there could have been real problems. The technical rider we send to the promoters specifies that "no less than two power drops of 120V and 20A capacity can be located in the mixing position of the front of the stage."

In this concert, the rider was quickly ignored. What they supplied us with was a single 20A and 220V drop with an American-style plug. This could have been a big deal if I hadn't had the AR-PRO to do the conversion. The manufacturer announced a significant improvement for the AR-PRO.

These features, along with the P-3600 ARG's 30A output capability and wide input voltage capture range, make this a unique solution among the many portable voltage regulators and power conditioners and are a reliable application-specific alternative for increasing or decreasing transformers. The P-3600 AR G is expected to be dispatched in the second quarter of 2010.

The next concert was also in Brazil, in a different place, and it turned out to be something very easy to perform. The local sound company offered a 220V supply in a three-terminal American outlet that was located on the front. I plugged the AR-PRO into this source and no adjustment was required. The input voltage was fixed at approximately between 214 V and 218V at rest and the output of the AR-PRO was 120V solid.

The only bad thing was the sweltering heat we felt: 36 oC and 93% humidity.  As a precaution, I placed a fan above the console that holds my Digico amplifier, the AR-PRO, and the three Furman PL-PROs that are used as auxiliary power to distribute power within the consoles individually. By the end of the night, the AR-PRO was quite hot but the local Digico console was boiling. In the future, I think I'll need to add a strong cooling system for this console as I think the Digico really does is the AR-PRO gets hotter by proximity.

Def Leppard and Europe
I have nothing more important to note about South America. We took a break and then headed to Europe (where we also took our own equipment) to tour with Def Leppard. We were in Europe for about a month and a half, performing between 10 and 15 concerts and offering in each country an "aria" or "ania" at the end of them. We went through hell in Europe. We had a lot of problems in every place we were.

First of all, there are the basic problems involved in just touring Europe. You're crossing a border every night. In some of them, you can literally have all your papers in order, but due to language problems you can be left sitting waiting between four and six hours.

Because border agents are waiting for you to give them a box of T-shirts or CDs to let you through. It's basically a bribe, and both parties sit there waiting until some manager, or whoever, realizes what's going on. At a specific border, we waited six hours. It was an amazing scene. There were three buses full of fans with nothing to do; a cabin full of liquor and a hole in the floor to be able to go to the bathroom. Good times these.

I'm going to tell you a funny story. Our technical rider specifies that the local company has to supply a system of cables to connect the stage and the front. Basically, it is something very generic that can be ordered, taking into account that our "rider" did not have one. So, in a particular country, we go out at night before meeting with the people in charge of sound, lighting and stage. These guys came from Germany. It was a four-day journey for them to get there, so there was no way they would go back to get something they had forgotten.  Unfortunately they forgot the cable system or it was simply lost.

We also realized that night that there were no sound companies about a hundred miles around, so renting wasn't a possibility either. In addition, the city had constant blackouts and some sectors had energy during the day and others only at night. It also caught our attention that in order to obtain energy you had to bribe the governor of the city. These things made this concert crazy.

Fortunately, there were some guys from the city who belonged to a musical band and told us that they could offer us some equipment. So we got in his car in the middle of the night and drove through this crazy sector. There were overturned cars and things like that everywhere, which reminded me of Beirut or something like that and I think that's not a good sign.

We arrived at a warehouse full of scrap metal, which was basically a large concrete bunker where razor wires and wire meshes were used as doors. There was no electricity, so I had to try to make wiring from essentially nothing, holding a pen-flashlight in my mouth. Finally, I managed to install something for approximately 24 channels. It basically consisted of cables and cable tapes, but it ended up working well. However it is the most pirated and ridiculous thing I have ever used in my life.

Something really interesting happened at a concert in Romania. For the show we were using a local sound company for PA and lights. I had my equipment ready for Whitesnake, while Leppard had his own facility.  The power was 220V. I measured the power, which seemed to be normal and plugged in my 20A dimining transformer that I've had since we were in the UK.

More anecdotes
There is something important to note about the transformer. There is a small LED on the front, which lights up if the power changes (hot/neutral). Reversing the phase accidentally is very easy to do here when using the Type-C plug, so you have to be very careful. And depending on what's coming, the results can be disastrous. If it's a voltage 120 from the United States, nothing is going to happen. But if it's a voltage of 240 or more, everything can be destroyed in a second, depending on what's been plugged in.

Some equipment can take higher voltages and will be safe if it has self-converting power supplies. However, in the audio world, most things require specific voltages or can simply be changed with manual switching. The irony is that in other countries local people don't understand this because they have everything at 240V or higher. It's not a problem for them, but it's a critical thing when you're working with high voltages that you're trying to reduce. Anyway, everything is an experience in life.

During dinner, it started to rain. You won't believe it! We were at 44 oC all day, so we didn't expect this to happen. I ran to the facility to cover everything and all I found was smoke coming out of Def Leppard's consoles and his FOH team frantically pulling the plug. I immediately put the energy into my own team.

To sum up the story, after we went to dinner, the guys from the local sound company needed another outlet on the front. They withdrew our energy and added a multi-stick lock and connected everything again, without making the respective measurements.  The power output lock was reversed. I already told you what can happen when something like this happens.

You won't be surprised to learn that everything that wasn't operating with a Furman unit on Def Leppard's team (or didn't have a 110-240volt power supply) was immediately destroyed. They actually had an old-tech Furman PL unit, which was sacrificed to save a console full of high-value audio equipment. In the end they lost several pieces of equipment that had no protection.

Fortunately, most of those things were not essential, such as recording devices, so the show could be done. As for my team, everything was perfect. Without the AR-PRO, they wouldn't have been able to perform the concert that night and I was still trying to replace my equipment in Romania.

Well, that's what happened on the last tour. Soon, I will continue my path with Aerosmith and I am sure I will have countless stories to tell you about it.

* Brad Johnson is the chief engineer at Whitesnake and the personal engineer for Steven Tyler of Aerosmith. Johnson is an expert audio engineer with over 20 years of music touring experience.

No thoughts on “Challenges of a sound engineer”