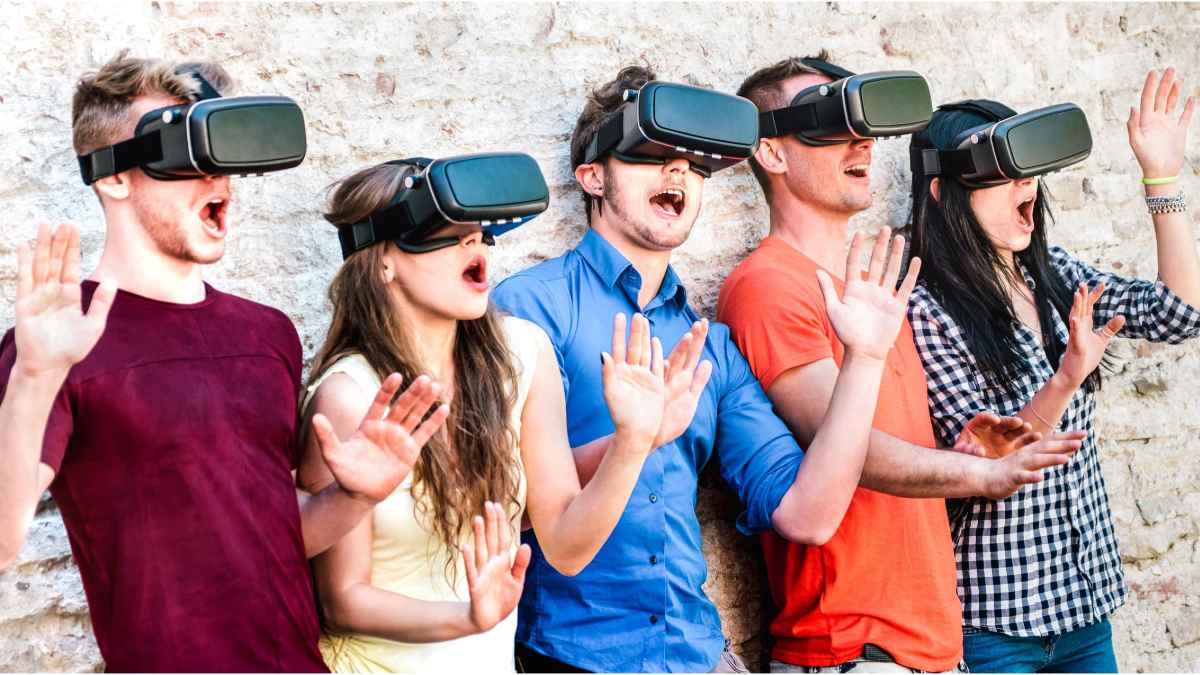 Most of us have shared virtual spaces with others where we have connected and collaborated. Does that mean the metaverse is already here? Well, yes. There are versions of it all around us.

Anyone who bought their first car in the 1980s would never have imagined that autonomous electric cars would fill our roads just a few decades later. But, that's a reality today. Technology is advancing so fast that it's hard for anyone to imagine the future.

Much of our technology today was science fiction just a few years ago. Because of this, many underestimate the brilliance of the metaverse. Seeing things we've only seen in movies become real-life technology available to everyone seems like an exaggeration. It almost seems impossible, but it may not be as far away as many believe.

For now, the current state and future possibilities of the metaverse are vague and defined moment by moment. With the amount of money flowing to build the foundation of the vision, it's important to have a firm understanding of what our future is likely to be. Much more if we take into account that, according to Bloomberg's forecast, in 2024, the size of the Metaverse market is expected to reach 800 billion US dollars. Meanwhile, PricewaterhouseCoopers predicts it will reach $1.5 trillion by 2030.

Acer co-founder Shi Zhenrong said in an interview with Bloomberg Businessweek that the metaverse is not the future, but the product of the technological progress that has already occurred, our exploration and practice of the next generation of the Internet. For Shi Zhenrong, the metaverse consists of two main parts: one is visible hardware and the other is software. Among them, hardware includes electronic-based semiconductors and information equipment, and software in a broad sense encompasses various contents.

But what is metaverse?
The metaverse is a response to the natural human desire to explore and immerse ourselves in alternate realities. Despite the complexity of the metaverse, understanding what it is on a fundamental level is simple. In fact, most of us have already experienced the metaverse.

The metaverse is any virtually hosted open and shared space in which users can play, connect, create, collaborate, trade, and consume. While there have been many representations of the metaverse for quite some time, virtual and augmented reality technology combined with virtual currencies have created our "next big thing."

What does "metaverse" mean?
Understanding the metaverse begins with looking at the word itself: beyond (meta) our current space or universe (verse).

In 1987, Jean Baudrillard used the term "metaverse" to refer to the ways in which media and technology shaped the world we experience. Snow Crash, neal Stephenson's 1992 novel, introduced the idea of the "metaverse" in a way more similar to what we are seeing evolve today. Although it's still not exactly what Stephenson described, the fundamentals of his vision are still there. Like many emerging innovations, it's not an entirely new concept.

One of the most popular early evolutions of the metaverse was Second Life, a virtual world game created in 2003. It was a world inhabited by real people who, under the guise of an avatar, could play, collaborate and connect with each other.

Have I already used the metaverse?
It is important to remember that the metaverse is not one thing. While Mark Zuckerberg is at the forefront of creating a new vision for this with Meta, the term metaverse is a broad idea and Mark Zuckerberg's interpretation is just one version. Maybe one day, the metaverse will be completely connected, but for now, it is a series of separate concepts only weakly linked.

At its core, it's a revolutionary next-generation social media network thanks to virtual and augmented reality technology. The metaverse offers a change in the way we do the things we've always done. It's similar to how the term "internet" evolved over the years.

However, social media exists in abundance. Most of us have shared virtual spaces with others where we have connected and collaborated. Does that mean the metaverse is already here? Well, yes. There are versions of it all around us.

We have digital spaces where users can watch virtual concerts, buy virtual real estate, buy a soft drink, build a house, sell an NFT and attend a business meeting. Just because we've developed the first iteration of the metaverse doesn't mean that the term (and the evolved view itself) won't be totally unrecognizable from where it started. 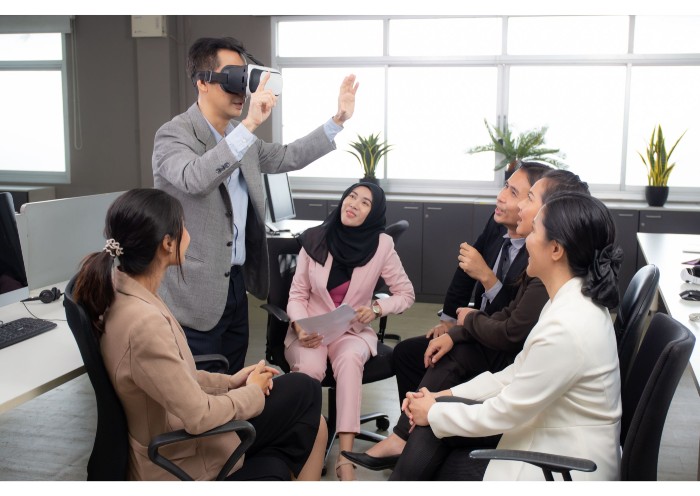 What is the difference between VR and AR?
The main difference between VR and AR is where the user "feels" they are. Virtual reality gives the user the opportunity to feel that they are completely immersed in a virtual world. The user's view of the real world is cut off and a headset replaces that visual field with a virtual world. It is a completely immersive and interactive first-person view of an alternate reality.

AR only complements (augments) the real world. The user remains in the real world, but the visual field is reinforced by virtual content. Most AR technology is based on glasses, not glasses. These glasses enhance the real-world visual field with information, visuals, music, and more. It is immersive and interactive, but not at the level of virtual reality.

With VR and AR technology booming, the potential of the metaverse continues to grow. While AR has many interesting metaverse applications, it's VR that catches the eye.

Exploration: Fully immersive virtual environments are what many of us imagine as the emerging metaverse available to us. These versions of the metaverse allow users a total immersion in an alternate reality. Within these alternate realities, users can adopt an avatar, play games, collaborate, and interact with other users.

Entertainment: Impressive collaborations have accelerated the popularity of the metaverse. Fortnite, for example, has joined popular artists like Ariana Grande and Travis Scott. Within the metaverse, these artists have organized concerts for large audiences full of enthusiastic fans. With beautiful theatricality and unlimited creative freedom, the metaverse offers a fascinating experience for many fans.

Meetings: Since 2020, the way we work has changed dramatically. With remote work becoming the norm, metaverse is sure to be an integral part of our working life. Bill Gates predicts that "most virtual meetings will move from 2D camera image grids to metaverse, a 3D space with digital avatars" very soon. This will be a shining example of how the metaverse aims to improve our lives. Meetings on the metaverse will be an immersive experience, very different from the flat, two-dimensional experiences currently taking place on Zoom.

When will the "real" metaverse be released?
Those who plan to enter the metaverse today and witness the mind-boggling potential that has been promised may be a little disappointed with what is available. A fully immersive, interactive and interconnected metaverse is still several years ahead of us. Despite the hype (however well-deserved), there are limitations as to what the metaverse is since we currently do not have the online infrastructure to admit billions of people on a central metaverse at a time. In addition, a beautifully depicted experience on the metaverse is not yet possible due to suboptimal Internet connections. Choppy, flawed animation is a frustrating experience, especially in the virtual world.

That said, there are still plenty of metaverse options you can explore. Today most worlds require some form of account registration using a stable internet connection. Some options are stricter and require access to cryptocurrencies to buy and sell digital assets such as NFT.

While the metaverses you'll explore won't be the caliber of alternate realities depicted in science fiction movies, entering the metaverse now is a great way to enter the ground floor of a very promising innovation. To begin your journey through the metaverse, check out our previous examples of the metaverse listed above.

The Future of the Metaverse
The power of the metaverse is undeniable, but it is not without criticism. Some critics are dragging their feet, refusing to pay attention to this emerging technology. Others criticize the current evolutions of the metaverse for not being anywhere near the ambitious visions put forward by its strongest proponents.

However, one thing is certain: the evolution of the metaverse marks the beginning of a new era in our technological lives. "This technological change will undoubtedly permeate almost every aspect of our lives in the future. While some see the technology itself as the biggest draw, many flock to these virtual realities to take advantage of the abundant opportunities available right now," Acer said.

No thoughts on “Virtual meetings and the metaverse”